Is Niqab Established in Islamic Law or is it Merely a Cultural Practice?
Share:FacebookTwitterEmailWhatsApp
Women’s Fiqh

Is Niqab Established in Islamic Law or is it Merely a Cultural Practice?

I have recently started wearing hijab, however, i am now being
introduced to many different forms of it. Personally, I wear loose
fitting and covering clothing, with a scarf wrapped around my head, so
as only my hands and face are showing. However, I have been told by
some that the niqab/face veil is the right way to cover oneself. Then
others will tell me that the niqab is cultural and not a religious
obligation. I would like to know what the quran/sunnah say about this
issue. And was also curious as to how the Prophet’s (sws) wives wore
their hijab. I have been told Aisha (r.a.) did not cover her face and
simply wore a hooded cloak, is this true?

In the name of Allah, Most Beneficent, Most Merciful

Thank you for your question. In terms of the proper dress code for a Muslim woman, there is no standard; it varies from culture to culture. However, the key is that any clothing worn by a Muslim woman should always adhere to the following requirements:

As for niqab, it is necessary (wajib) according to the Hanafi school of thought. Given the prevalence of temptation between the sexes, niqab is a fundamental protection against immodesty and sin. Therefore, when a woman leaves the confines of her home, she should conceal herself with both hijab and niqab, such that no part of her body is left exposed.

In explanation of the verses of hijab, (Surah Al-Ahzab, 59 & Surah An-Nur, 30-31), it has been relayed by the Mufassireen that Abdullah Ibn ‘Abbas said that when the believing women emerge, they must draw their jilbabs (a long sheet that covers from head to feet) over their heads and faces and reveal only one eye. [Maarif-ul-Qur’an]

The following hadith have been recorded in Abu Dawud:

It has been narrated from Aisha (may Allah be pleased with her), “May Allah have mercy on the early immigrant women. When the verse, ‘That they should draw their veils over their bosoms’ was revealed, they tore their thick outer garments and made veils from them.” The muhaditheen have interpreted this to mean that the Sahabiat covered their faces.

It has also been reported by Aisha (may Allah be pleased with her), “Riders would pass us when we accompanied the Messenger of Allah (Allah bless him and grant him peace) while we were in ihram. When they came by us, one of us would let down her jilbab from her head over her face, and when they had passed on, we would uncover our faces.”

It has been narrated by Umm Salamah (may Allah be pleased with her), “When the verse, ‘That they should cast their outer garments over their persons,’ was revealed, the women of Ansar came out as if they had crows over their heads and draped over them were black clothes that they would wear.”

It has been clearly established from the Qur’an, the Sunnah, and the scholars of our ummah that the Sahabiat were the epitome of modesty and righteousness. May Allah, the Most Exalted, give us the iman to live as they lived and worship as they worshipped. 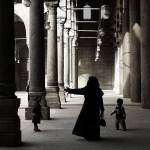 DOES VAGINAL DISCHARGE IN THE MORNING NECESSITATE GHUSL?